Annapolis, MD –  Today, the U.S. Environmental Protection Agency announced the recipients of the inaugural, $965 million Clean School bus Program rebates. The program, created by the Infrastructure Investment and Jobs Act of 2021, will invest $5 billion over five years in clean school buses. The 2022 rebates will fund approximately 2,400 new school buses for nearly 400 school districts across all 50 states, 30 tribal nations and multiple U.S. territories, with the overwhelming majority of funds going to electric school buses.

“Investing in electric school buses is an investment in clean air and  most importantly, our school children. These buses have the potential to be transformational for Baltimore City Public Schools, eliminating toxic chemicals in the air that our children and communities breathe and providing quieter rides, better health, and fewer school absences due to preventable respiratory illnesses.

Three of the four candidates for attorney general – Anthony Brown, Katie Curran O’Malley, and Jim Shalleck have agreed to answer questions related to the role the office plays in defending the environment.

The program will take place on Zoom and is expected to last 30 minutes. The program is offered for free. REGISTER HERE TO ATTEND. (If you are not available to attend at the time of the program, you may still register to receive a link to the recording after the program has ended.)

WHY YOU SHOULD CARE ABOUT WHO BECOMES OUR NEXT AG

Did you know that the Trump Administration tried to replace the Obama Administration’s Clean Power Plan from 2015? The proposed plan failed to regulate greenhouse gas emissions or other harmful air pollutants from coal and oil-burning power plants. Fortunately, the Maryland Office of Attorney General joined the fight challenging the rule change in court and won victory for clean air.

Did you know it was the Office of Attorney General that negotiated a $35.5 million settlement for the State of Maryland with Volkswagen as a result of their violation of our air quality control laws?

This election year, the position of Attorney General is one of three open statewide seats. Maryland League of Conservation Voters Education Fund wants to ensure voters are aware of the importance of the role of Attorney General in advancing and defending environmental policies.

All four registered Attorney General candidates were invited to participate in the forum. Republican candidate Michael Anthony Peroutka did not respond to our invitation.

Reposted with permission from the Bay Journal

Candida Garcia had never been involved in environmental causes. But over the past four years, she has founded a community garden, grilled local officials about air quality, campaigned for statewide bans on plastic bags and straws and successfully lobbied her county to purchase electric school buses. 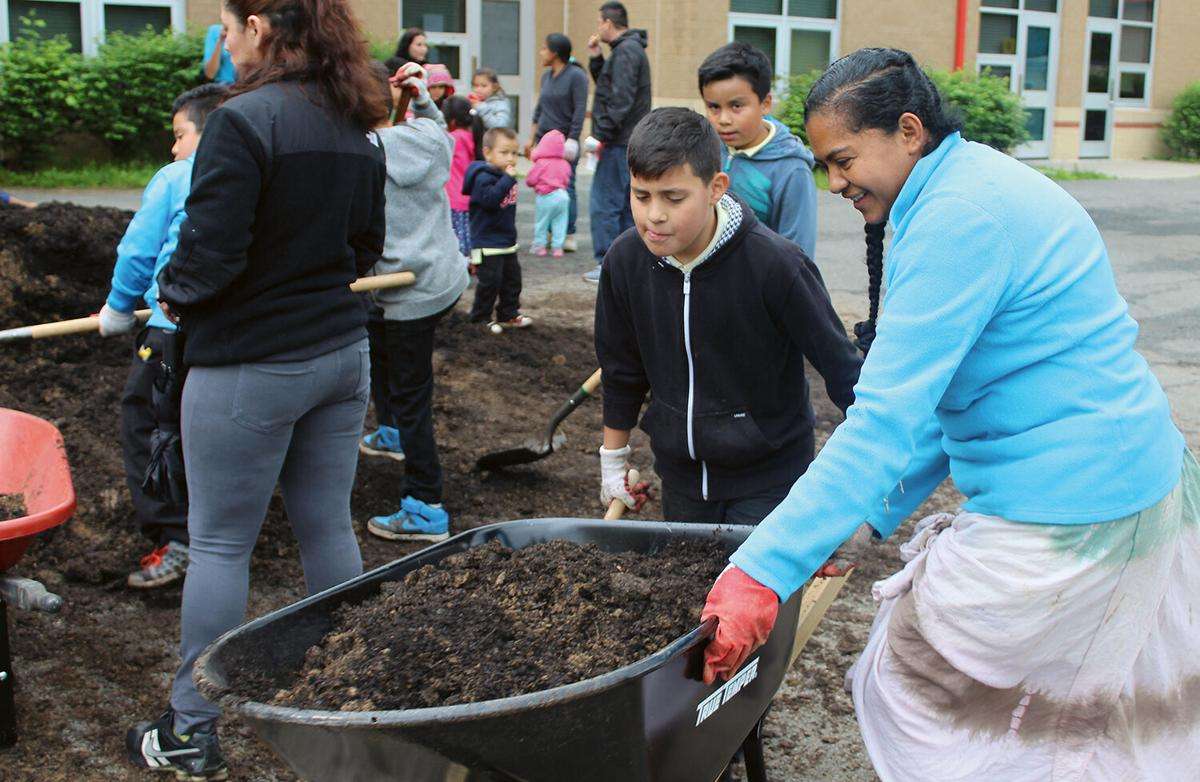 Garcia chalks up her transformation to a leadership program tailored to a demographic that the White-dominated environmental movement has historically overlooked: the Latinx community.

Including Garcia’s inaugural class of 2016, Chispa Maryland has produced more than 100 graduates from its Promotores program. Over the course of six to eight weekly classes, they are given the basics of environmental justice, advocacy and community organizing — with the hope of creating a generation of grassroots “promoters.”

Garcia and her fellow promotores are finding that their work has never been more difficult or urgent. During one of the most imperative moments in its short history, the program may be the prototype that shows green groups in the Chesapeake Bay region and elsewhere how to diversify their membership, said Ramon Palencia-Calvo, director of Maryland’s Chispa.

“I think there’s an understanding among environmental groups that we need to expand our reach beyond the typical audience — the White middle-class person who has disposable time and income to volunteer for an environmental cause,” he said. “We want to create a movement that represents the entire population of Maryland.”

Nearly 90% of leadership positions in environmental groups nationwide were held by White people as of 2014, according to a widely cited study. Hispanics and Latinos occupied fewer than 3% of those positions. 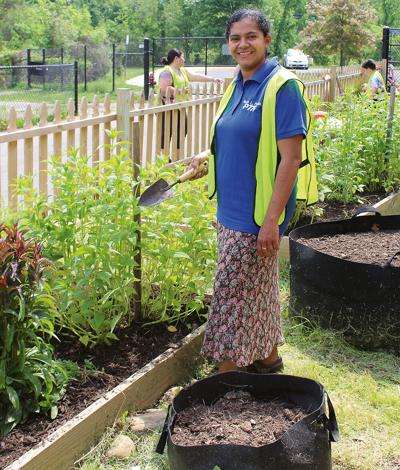 Candida Garcia works at the Rosa Parks Elementary School community garden, which science teachers have used as a living classroom.

“In order to make real change, we needed to build power in those communities that are overburdened by pollution and are underserved,” Palencia-Calvo said.

Chispa, meaning “spark” in Spanish, was created by the Maryland League of Conservation Voters in 2014. It was the fourth state-based LCV organization to have its own Latinx-geared program after New Mexico, Colorado and Arizona. LCV affiliates in Connecticut and Nevada launched programs the following year, bringing the total to six nationwide.

Palencia-Calvo, a former fellow at the Worldwatch Institute, has been overseeing the Maryland program from its earliest days. He never worried about finding a receptive audience. Polls routinely show that Hispanics are concerned about global warming and are apt to believe it is caused by humans. They also show a strong commitment to a host of other environmental issues.

So, he and his team started knocking on doors, beginning in Langley Park in Prince George’s County. About three-quarters of the community’s nearly 20,000 residents are Hispanic. Their housing is often plagued by mold and lead-based paint. The outdoors offers little reprieve because the air is fouled by the area’s heavy traffic.

Four years later, about 30 of Chispa’s promotores reside in the densely populated nook just inside the northeastern corner of the District of Columbia’s Capital Beltway. Garcia was one of the first.

Speaking in Spanish with Palencia-Calvo acting as a translator, she said concerns about the health of her four children triggered her interest in the environment. Could one of her son’s severe asthma attacks be linked to bad air quality or her aging home? How could she find out if her drinking water was safe?

She and other Chispa participants gathered with their families in the evenings at the local community center. Childcare wasn’t a problem because Chispa had educational activities waiting for them. Everyone brought a dish to share.

Chispa staff conducted most of the training, but some sessions featured experts from other environmental groups. After 40 hours of training — the total has since been shortened to 24 hours — Garcia received her graduation certificate. She swelled with pride. “Muy feliz” (very happy) is how she describes the feeling today.

Then, Garcia got to work. With financial support from the Chesapeake Bay Trust, she organized a community garden at Rosa Parks Elementary in Hyattsville. It was designed as a “therapy space,” where families could enjoy a rare opportunity to be together, she said. They grew tomatoes, peppers and other staples, which were distributed among some of the school’s low-income families. For the science teachers, it became a living classroom.

Because of the pandemic, the garden was left fallow this year, but Garcia’s other efforts continue to bear fruit. In 2017, Chispa Maryland launched a “Clean Buses for Healthy Ninos” campaign, seeking to steer some of the state’s $75 million Volkswagen settlement money toward zero-emission, electric school buses. Garcia was on the campaign’s front lines, writing a blog post and talking to elected officials.

Last September, the Maryland Department of the Environment invested $2.5 million of that funding in an electric– and propane-bus pilot program in four counties, including Prince George’s.

The Promotores classes have been put on hold this year because of the pandemic, but Chispa leaders hope to restart the program once it’s safe for groups to gather again.

This year’s seemingly unending battle with COVID-19 has plunged Garcia and Palencia-Calvo into territory that would be unfamiliar for many green-focused groups. Garcia, a board member with the Langley Park Civic Association, partnered with Chispa to apply for a grant from LCV’s COVID-19 fund. The association was awarded $20,000, which will be disbursed to families who have suffered financially because of the pandemic. Chispa and the civic association collected an additional $15,000 through community fundraising efforts.

The community has given much to the green movement over the years. Now, it’s time to give back, Garcia said.

“Environmentalism is about the health of the families and the people that we love,” she said.

Funds will support Langley Park residents who have been disproportionately harmed by the coronavirus pandemic.

Annapolis, MD – The Langley Park Civic Association, a nonprofit Latinx led organization that serves individuals residing in Langley Park in Prince George’s County, Maryland has been awarded $20,000 by the League of Conservation Voters to bolster the Association’s COVID-19 relief efforts. Upwards of 80% of community residents are Latino.

“This grant from the League of Conservation Voters will provide a great relief to these families so that they are not left behind, and it will also help our community to move forward together,” said  Cándida Garcia, a board member of the Langley Park Civic Association. “The Civic Association will use these funds to provide direct financial relief to immigrant families that are experiencing hardships related to COVID-19 and increase the capacity of the Langley Park Civic Association to better assist residents of this community during the pandemic and beyond.”

The Langley Park community is a longtime partner of the Maryland League of Conservation Voters Education Fund. The Maryland LCV Ed Fund — through its Chispa Maryland program, and in partnership with community leaders, community members and the Langley park Civic Association — has delivered environmental education workshops, advocacy opportunities and leadership training that has produced  over  30 Environmental Justice and Action “Promotores” (advocacy leaders) from this community.

“These Promotores and leaders have become the heart and soul of the Chispa Maryland program, and this community has been a key ally in advancing environmental legislation and policies that incorporate environmental justice in Maryland,” said Chispa Maryland Program Director Ramon Palencia-Calvo. “With many community members experiencing income loss due to lay-offs or significant reduction of work hours, and many unable to access federal assistance programs, we consider continued support for the community to be an urgent priority.”

Last May, Maryland LCV Education Fund and Chispa Maryland partnered with the Langley Park Civic Association to also assist its immigrant residents during the coronavirus pandemic. Jointly, the two raised over $10,000 through a 10 day GoFundMe campaign to help families with emergency assistance for rent, food, medicine, and other essential items.

“During that same May period, we applied for the $20,000 grant for the community from the national League of Conservation Voters’ COVID-19 Fund,” said Palencia-Calvo. “We are thrilled that the funds have now been awarded, because the community of Langley Park continues to experience hardship due to the coronavirus pandemic.”

Those who are interested in supporting Chispa’s COVID-19 community relief efforts should contact MD LCV at rpcalvo@mdlcv.org

The Maryland LCV Education Fund, a non-profit, non partisan organization, works to strengthen the Maryland environmental community by growing a base of conservation-minded voters across the state. A leading environmental organization in Annapolis, we have advocated for smart environmental policies working to make Maryland a healthy and prosperous place for families and communities. Maryland LCV Ed Fund protects public health by fighting for restoration of the Chesapeake Bay and local waters, preserving green spaces, promoting smarter growth and increasing Maryland’s investment in clean energy.

Chispa, meaning “spark” in Spanish, is a program of Maryland League of Conservation Voters Ed Fund launched in 2014. Chispa Maryland has been working to ensure that Maryland Latino families and community leaders are a powerful voice for protecting the environment, our health, and our future. Chispa works with Latino families, community groups, faith-based organizations, and legislators to identify and address unique environmental issues facing Latino communities in Maryland